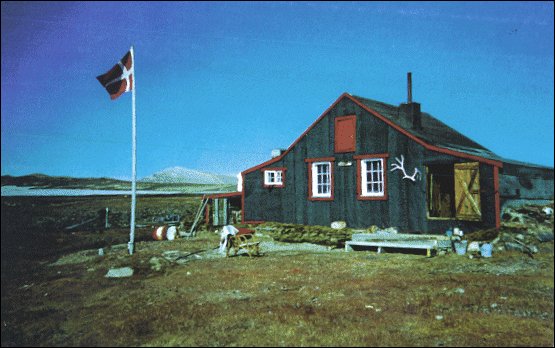 The management board consist of seven. These are: Peter Schmidt Mikkelsen (director), Tommy Pedersen, Palle V. Norit, Søren Rysgaard, Fritz Ploug Nielsen, and Jesper Mølbæk Stentoft. Nanok’s accountant is Aka Lynge. Torben E. Jeppesen assists with purchase of assets. Nanok’s logistics centre is managed by Kristian Nevers, who furthermore fabricates Nanok coal stoves of own design in his blacksmith workshop. Besides the above mentioned, a number of private individuals actively contribute to Nanok’s work. All work in Nanok is voluntary and unpaid.

As an organisation Nanok does not have any members, so you cannot apply for membership.

Each summer, Nanok dispatches a field team of typically 6-10 participants divided into 2-3 teams who work in North-East Greenland for three to five weeks. The results of this work are documented and published in a field report. The expedition participants are chosen by the Board. In the years 1991-2021, a total of 198 Nanok'ers – or more than 90 private individuals – have been dispatched to North-East Greenland.

To perform its tasks, Nanok controls a considerable amount of expedition assets.

Nanok’s work is supported by the Aage V. Jensens Fonde.

Since 1991 Nanok has restored and maintained about 50 old culture historical buildings and for this achievement received much support and recognition, e.g. from the Greenland Selfrule and Greenland National Museum & Archive.

During 2003-2007 Nanok carried out a systematical registration of all more than 300 culture historical buildings in North-East Greenland. These registration were given without any charge to Greenland National Museum & Archive in Nuuk.

A major part of the registration material, including photos and GPS-positiona is publiced in the book "North-East Greenland 1908-60. The Trapper Era" (Scott Polar Research Institute, University of Cambridge, 2008)

Status of the huts

If you wish to contact Nanok or have questions regarding the old huts in North-East Greenland you are welcome to send us an e-mail.